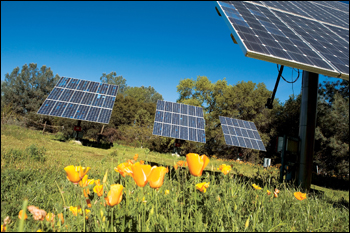 The Sun produces various forms of energy that sustains life on earth. Without the energy provided by the Sun, most life forms known on earth will cease to exist. It will drastically change established life cycles and food chains and will start a new evolution process.

Like most stars, the Sun is composed mainly of hydrogen gas. The process of producing energy starts from the core of the Sun. The core

is the hottest area of the Sun and is so compressed that enormous amounts of hydrogen atoms fuse together. In the process known as nuclear fusion, the hydrogen atoms are converted into helium, the same gas used for balloons.

Nuclear fusion produces massive volumes of energy that radiates outward to the surface of the Sun and beyond. The energy continues to taper off and weaken as it makes its way to the Earth’s atmosphere. The energy finally touches the surface of the earth in the form of sunlight, a combination of radiant light and heat.

Solar energy is the result of nuclear fusion and is mainly the source of energy on Earth. Once it is harnessed, solar energy can be used to generate electricity and heat through the use of solar cells (photovoltaic) or by solar power plants. Solar power plants transform energy to steam that is used to fuel generators that in turn provide the energy to power various industries and residential areas.

Gasoline is an indirect product of the Sun’s energy. It is created from fossil fuels or the remnants of living creatures that lived thousands of years ago. These long extinct plants and animals once existed, aided by energy derived from the Sun. Natural gas and oils that human beings of today use, reached their current states because of energy from the Sun.

Comments - 4 Responses to “How Does the Sun Produce Energy?”