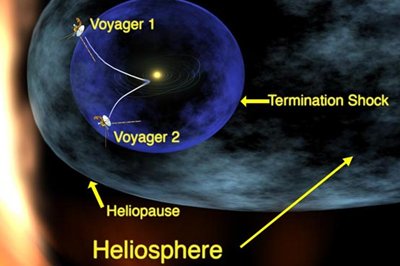 The heliosphere is the protective layer surrounding the sun. It is like a bubble in space that is basically produced by solar winds. Solar wind is composed of particles, ionized atoms and magnetic field. This wind streams off of the Sun at the speed of about 400 km/s. This speed will start to slow down as it hits interstellar space or the interstellar medium. It will move slower than the speed of sound as it passes through a termination shock. The outermost region exposed to the charged ions is called the heliopause.

Without the heliosphere life on Earth would be almost impossible. Intergalactic cosmic rays can destroy DNA making any life form non-existent. However, recent studies have discovered that this protective layer has been shrinking over the past decade. It was found that heliosphere energy has been weakened by 25 percent. Scientists are making further research and trying to launch mission in space to find out what could be the probable reasons.

There have been interplanetary spacecrafts launched to further study this layer. Most notable are the Voyager 1 and 2. Travelling outward through solar system and trying to pass through the heliopause, they are hoping to learn more beyond the solar system.

Sentinels of the Heliosphere

Comments - One Response to “Heliosphere”