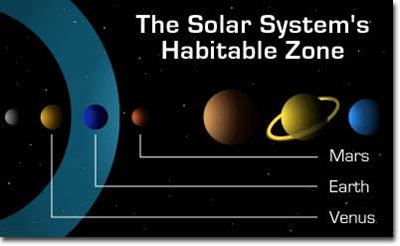 Water is an important element to sustain life. In order for a certain planet to support existence, it has to have liquid water on its surface. For this to be possible its effective surface temperature must be above the freezing point of water. A star like sun can provide energy radiation enough to maintain this temperature. But it should not be too hot to make the water vaporize. The condition described is the habitable zone.

Habitable zone is defined as the distance or a range of distances from a star from which an orbiting planet can have liquid water on its surface. It defines the orbital radii in which surface water can be present and so are the life forms. These distances may vary depending on the extent of the host star’s size, mass and luminosity. Stars of smaller size giving lower luminosity encompass a closer habitable zone while larger stars will create further habitable zone. To illustrate, life forms in Mercury would have been possible if the Sun has a mass half of its present size. Earth and Mars would be both habitable if its size is 1.3 times larger.

Today, the Sun is 30% brighter than it was about 4 billion years ago. This is because all stars evolve with time making them hotter and brighter. In this case, habitable zones can be said to be moving out with time.