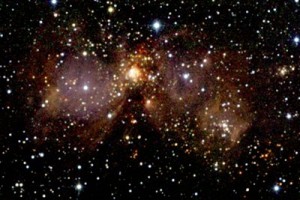 The most common element in the universe is Hydrogen. They are present almost everywhere. They can be found in the regions surrounding black holes, in stars and galaxies. Thus astronomers have preferred to name the three states of Hydrogen. The HI is the unionized form. The so called HII are the ionized form while the H2 refers to the molecular hydrogen.

HII regions developed from a giant molecular cloud. It is a cold, dense cloud composed of molecular hydrogen. Due to shockwaves brought about by supernova, this cloud collapse and are fragmented. This process causes stars to be born. A very high temperature is required to ionize the gas and eventually form the HII region. These regions commonly exist in the disk of spiral galaxies like the Milky Way. They can be rarely found in elliptical galaxies.

One of the most notable HII regions is the Orion Nebula. Astronomers and scientist found it harder to study the full details of massive star formation in this region. One main reason is the distance of these regions. The nearest is the California Nebula being 1,000 light years away. Another reason is that the presence of dust makes it difficult to monitor these stars formations.