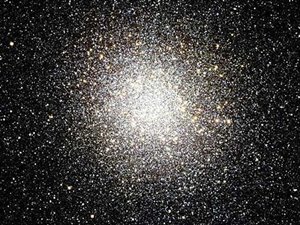 All stars are formed in clusters when a nebula starts to break up into separate clouds of material. But globular clusters are special, partly because they are so large, and also because the stars have not drifted apart. For example, there is now no trace of the cluster in which our Sun was born. About 100 globular clusters have observed in our Milky Way galaxy. They are all very far away from us, grouped around the nucleus of the galaxy. There were probably formed soon after the galaxy, at least 10,000 million years ago, so they are among the oldest objects in the Universe.

Comments - No Responses to “Globular Clusters”