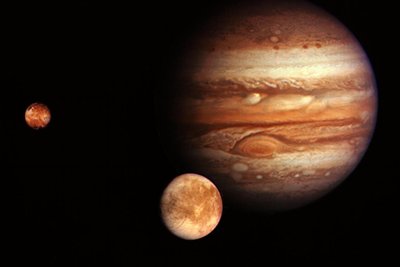 The Galilean moons/satellites are Jupiter?s four moons discovered by Galileo Galilei. Jupiter has many moons that orbits around it. These four moons are the largest of those moons. And its names were derived from the lovers of Greek god, Zeus. Those are Io, Europa, Ganymede and Callisto.

Io is the innermost Galilean moon. It is the 4th largest moon in the solar system. It was referred as the first satellite of Jupiter.

Europa is the second moon of the four. It is the second closest satellite to orbit Jupiter and the smallest. It is reported to be slightly smaller than the Earth’s Moon.

Ganymede is the third satellite to orbit Jupiter. This Galilean moon is named after a cupbearer of the Greek gods. It is the largest satellite in the Solar System, and it is actually larger than planet Mercury.

Callisto is last Galilean moon/satellite. This fourth moon is the second largest among the four, and it in the solar system, it is the 3rd largest. Callisto consists of roughly equal amounts of ice and rock. These components make it the least impenetrable of the Galilean moons/satellites. It has a basin, called Valhalla, as one of its major features with a width of 3000 km.