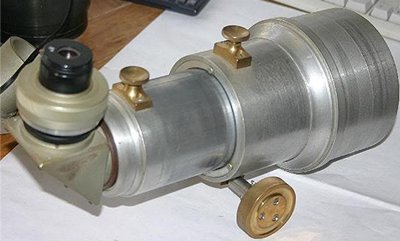 A focuser is part of the telescope mechanism which allows the telescope to adjust its focus, done by either turning a knob or gear in the telescope; thereby adjusting its eyepiece or mirror. There are many different types of focusers, varying in design, use, and models. The most common and most basic focuser is the rack and pinion. The rack and pinion works by converting rotational motion of a small gear (the pinion) into linear motion by the flat bar (the rack). A micro focuser is designed the same way as a rack and pinion, but with smaller teeth on the rack to allow for even finer adjustments.

Another type of focuser is the Crayford focuser. In this design, roller bearings are used to move

the drawtube instead of gears. The Crayford focuser was designed to eliminate backlash which can sometimes be found in poorly made pinion and rack focusers. Because Crayford focusers can be made without special machinery, Crayfords are popular among amateur telescope makers.

There are also electric and motorized focusers which completely eliminates vibration by removing the need to touch the telescope; with variable speeds and a separate controller.

A focuser is an integral part of a telescope, and one of the first parts of a telescope that is easily worn out due to being constantly used and moved. It is thus important for a focuser to be well made and be durable.

Comments - No Responses to “Focuser”