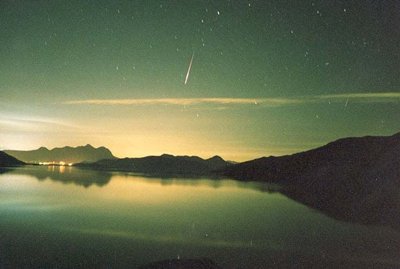 In astronomy, a fireball is a meteor that is brighter than any of the planets seen in the sky. Consequently, any meteor that is bright enough to cast a shadow on the earth is also called a fireball. Fireballs that detonate or explode in the air or in the atmosphere (those that don’t reach the ground before exploding) are called bolides (sometimes also called as a detonating fireball) Bolides reach magnitudes of -14 or greater; while those reaching -17 and greater are called super-bolides.

The earth’s atmosphere usually burns up most fireballs, but there are a rare few that survive both the atmosphere burn and the ground impact; these are called meteorites, and are usually found in impact craters. Some impact are so strong, the entire meteor is vaporized, leaving no trace or meteorite in its crater.

There are a few percentages of meteoroids that do enter Earth’s atmosphere yet are able to escape its gravity and pass out again. These meteoroids are sometimes called Earth-grazing fireballs.

Comments - No Responses to “Fireball”