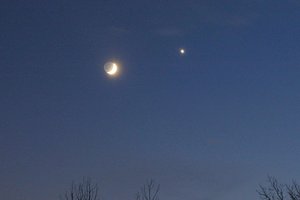 Venus, the second planet away from the sun, completes one revolution in about 225 earth days. It is a very bright heavenly body, which has a peak apparent magnitude of -4.6. This brightness is enough to cast shadows on earth. Because it shines most brightly right before the sun rises and right after the sun sets, it is called the Evening Star and the Morning Star.

Actually, the planet Mercury has the same behavior of being visible at dawn and at dusk. However, it can only be observed during a few weeks in a year. Since Venus is much larger and closer to earth, it has earned the title.

Because of its proximity to the sun, Venus is always found on the same side of the sky. If the sun is just setting to the west, the “star” can only be found at the west too. Its sulfuric acid clouds are highly reflective, causing it to glow brightly.

Venus is usually called the earth’s twin in terms of size, composition and gravitational pull. However, the atmosphere of the Evening Star is too hostile for life to exist. The atmospheric pressure on its surface is about 90 times greater than the earth’s. The air is also mostly carbon dioxide.

Comments - No Responses to “Evening Star”