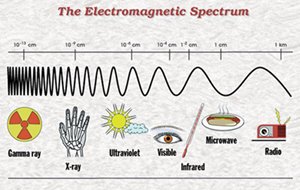 Light is a form of energy that allows us to see. And our major source of this energy is the sun. Light is considered Electromagnetic Radiation, which includes infrared rays, ultraviolet and radio waves. Through the ages, scientists have formulated theories on light?s nature. Because of its behavior and observed properties, it has the dual nature of being waves and particles at the same time.

Light has a speed of 300,000 kilometers per second. It can experience reflection, refraction and interference. In space, the speed of light is actually used to measure distance. A light year is the distance that light can cover in 365 days.

Visible light is just a small segment in the Electromagnetic Radiation Spectrum. Our eyes can perceive radiation only from a certain range of frequency. The combination of all visible light is white, and it can be broken to a broad spectrum of colors.

Stars, which are very hot bodies, emit high frequencies of light and other radiation. These are called ?short waves.? In physics, short wave radiation contains more energy than long waves. The hotter an object is, the shorter the wavelength of its emission. The sun?s short waves are essential to keep the planet earth warm.

Comments - One Response to “Electromagnetic Radiation”