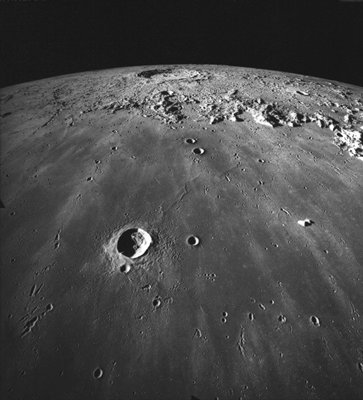 The Moon is the only natural satellite of Earth and is the 5th largest natural satellite in the solar system with an equatorial radius of 1,738 km. Despite its size, it is second only to Jupiter’s moon in terms of density. Due to the moon’s synchronous rotation with the Earth, only one side of the moon can be seen. The moon is the brightest object in the night sky despite having a dark surface. The moon is also the only celestial body, aside from Earth, on which humans have set foot on.

Astronomers have theorized that the moon was formed because of an impact between a large sized object (about the size of Mars) and the Earth during its formative phase. It resulted with a portion of the Earth and the large object being hurled into space which produced the moon. This theory is still being debated and no conclusive explanation has been reached because of varying evidences and opinions.

The most prominent feature of the moon are the dark plains on its surface called Maria (mare for singular). According to an old East Asian folklore, a rabbit sacrificed itself by jumping into a bonfire in order to provide a starving old man food. The old man turned out to be Sakra, a ruler of heaven in Buddhism. This act deeply moved Sakra and put the image of the rabbit in the moon in its honor.