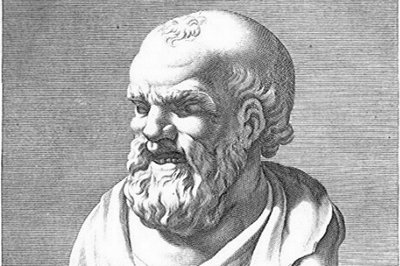 The greatest contribution of Democritus in astronomy is the atomic theory-the belief that everything in the world consists of particles called atoms. These atoms, Democritus believed, are indestructible, indivisible, and always in motion. They atoms are infinite in numbers, and come in different sizes and shapes.

Explaining the nature of atoms was not difficult through Democritus’ logical reasoning. He affirmed that the strength of an object depends on the shape of the atoms the object has. For instance, iron atoms are believed to be strong with interconnecting hooks, while water atoms are slippery. The atoms of salt are believed to be pointed, while the atoms of air are weightless.

Considering how Democritus was able to come up with these theories several centuries ago, it’s not difficult to be convinced that the man was a true genius. Today, we know that atoms interact through electric and magnetic forces, and this was not so distant from how Democritus imagined them. The atomic theory, during that time, gave a peep into the future of modern science that it is now.

Interestingly, Democritus used his theory on atoms to explain the way the universe functions. The philosopher believed that humans only created gods to make sense of incomprehensible things around them. The universe, in his view, is a very comprehensible machine made of atoms. He also maintained that every human’s soul is made of atoms. Democritus believed that human life should be guided by integrity and social responsibility. He maintained that the way to contentment is through discipline, acceptance, moderation, and harmony.

Expanding his theory further, Democritus noted the existence of infinite and eternal atoms and thoroughly postulated about how and why atoms combine to build larger structures in the universe. He gave an intricate explanation on how planets, stars and other worlds formed. Democritus lived in 5th Century BC, but the ideas he created were so advanced that he was often regarded as the founder of modern science.

He was a man who understood matter and energy, who thought that the Milky Way galaxy was formed by the light from other stars, and who boldly believed that man has the choice to make his own future.