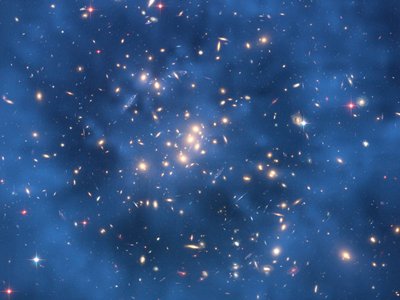 This theory was first proposed by Swiss astronomer, Fritz Zwicky in 1933. He studied the seven galaxies in the Coma Cluster with the objective of calculating the Cluster mass by studying their dispersion speeds. Since everything in the universe rotates, a galaxy’s mass can be calculated by the speed at which it moves. The faster its rotation, the more mass it has. Another way to do this was to measure its luminosity. After all, the mass of a galaxy is directly proportional to how bright it is.

However, Zwicky discovered that the calculations did no match up so he brought forth the idea that there is invisible matter out there that accounted for the discrepancy in his calculations. He added that this ‘dark matter’ is what keeps galaxies in their proper places. Other astronomers who calculated the mass of other galaxies encountered the same problem that Zwicky had which prompted astrophysicists and astronomers to investigate further.

However, although inconsistencies point out its existence, direct evidence remains elusive. It is commonly known that dark matter is made up of baryonic and non-baryonic bodies. Non-baryonic elements would not only include particles found in atoms, but also axions and Weakly Interacting Massive Particles (WIMPs). Cosmologists and astrophysicists are currently conducting experiments to detect these non-baryonic substances as an attempt to gather evidence of the existence of dark matter.

Comments - No Responses to “Dark Matter”