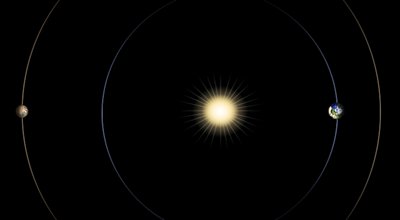 Conjunction, also known as appulse, a term used to describe the appearance of two celestial bodies as if they are near each other in the sky when viewed from a third body (usually the Earth). There are many causes why this phenomenon can be observed from time to time. In case of two planets, it denotes that they have the same hour angle due to the same right ascension.

Another cause is the conjunction in ecliptical longitude, but these two do not happen at the same time, but in most cases nearly at the same time. The common trend in this type of conjunction is that one planet apparently passes through the north or south of the other. A celestial body namely: a planet, a comet or an asteroid is to be said simply in “conjunction” when it is in conjunction with the sun as viewed from the Earth.

Comments - No Responses to “Conjunction”