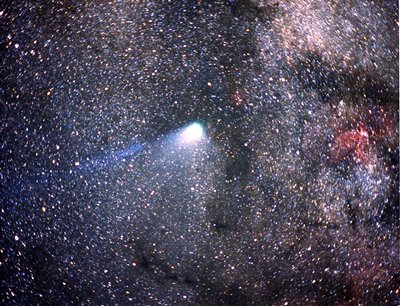 Comet is a celestial body consisting mainly of rock, ice and gases. A comet is a frozen mass, but when it comes to the inner solar system, its particles are ionized or excited, which emits light in the process, thus giving the comet a visible coma and sometimes even a tail.

The comet’s particles are also reflecting the light from the sun which gives it a hazy, luminous appearance. As of now, there are 3,976 comets being studied, about 500 are short-period while 1,500 are known to be Kreutz Sungazers. This is actually a small fraction of the entire comet population because it is speculated that the number of comets is over 1 trillion, most of them found at the Kuiper Belt or the Oort Cloud, both found in the outskirts of the solar system.

Most comets have highly elliptical orbits, which bring them very close to the sun and outside the solar system. They have widely-ranged orbital periods, ranging from a few years to thousands of years. The short-period comets originally come from the Kuiper belt while the long-period ones from the Oort Cloud. Comets were found to emit X-rays and are thought to be generated when there is an interaction between the solar wind and comets where the highly-charged ions collide into the cometary atmosphere, ripping one or more comet electrons.

Comments - No Responses to “Comets”