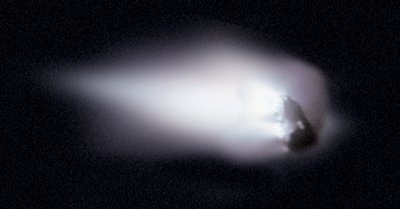 The middle part enclosed by the surrounding envelope called coma is known to be the comet nucleus. It is mainly composed of ice, rock and some gaseous particles such as carbon dioxide and carbon monoxide enclosed in a crust. It is sometimes called as the “Dirty Snowball” because of its characteristics.

When the comet is heated, the frozen gases sublimate and create the coma. Comets look almost identical to asteroids when viewed close-up. Researchers have found out that most of the comet nuclei have different land features. The average density of studied comets is known to be 0.6 g/cm3. Each comet nucleus has its own chemical composition which gives it a distinguishable look from other space objects.

When talking about the sizes of comet nuclei, most that have been already discovered were known to be of 10 miles (16 kilometers) across but one with a diameter of 40 km is known to be present. These comets lack gravity and that is the reason why their shape is inconsistent, most of the time in potato-like form. Comet nucleus was known to be the darkest object that is found in our star system. The dark, tar-like material found on the comet nucleus’ surface is thought to be a mixture of complex organic compounds.

Comments - No Responses to “Comet Nucleus”