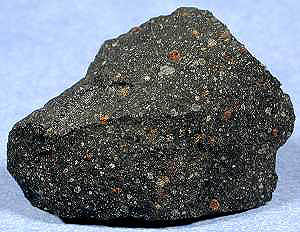 When a meteoroid or any other outer space debris falls to Earth, it is called a meteorite. The stones that are recovered from the impact are truly out-of-this world, because of their differences in the chemical composition when compared from rocks in this planet. Some of these meteorites are called chondrites.

What is a chondrite? It is basically any stoney meteorite that contains chondrules, embedded in its rocky surface. Chondrules are molten droplets that are formed in outer space at high temperatures, but then cooled, solidified and combined with the chondrites. Scientists believe that they were dusts and small grains, which were already present in the primordial Solar System.

There are 15 distinct groups of chondrites based on their chemical composition, mineralogy and oxygen-isotope presence. One of them, the carbonaceous chondrites, is rare and makes up 5% of the meteorites that fall to Earth.

Comments - No Responses to “Carbonaceous Chondrite”