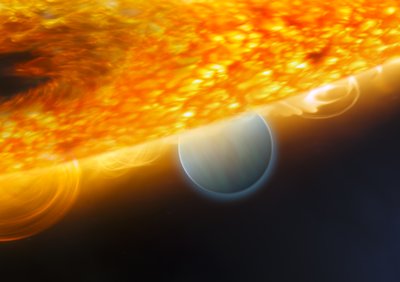 Carbon stars are gigantic stellar masses similar to red giants, but their atmosphere contains more carbon than oxygen. They are rare and they are so big they can swallow whole planets in our Solar System, indicating an advanced stage of evolution. Yes, stars too have different phases in their infinitesimal billion-year lifetime.

But first, what are red giants? They are old stars. And someday, somewhere in eternity, the Sun will eventually become a red giant and swallow Mercury and Venus. The red giant Aldebaran, which is 50 billion kilometers in diameter, is more than 35 times as big as the sun. Betelgeuse, a star in the constellation of Orion, is larger than the orbit of planet Mars. Carbon stars are as big as them, but only contain more carbon than oxygen.

As stars age, they grow hotter, and the radiation from their core tries to blow them apart. The outer layers then puff outwards, becoming cooler and therefore redder (for celestial bodies, red means cool and blue means hot). Red giants and carbon stars will eventually become white dwarfs.

White dwarf, on the other hand, is the final stage of a normal star before it fades to black. What is now left of the once giant star is its core, where nuclear energy is generated and which makes a star shine. It happens when the red giant collapses at its center. White dwarfs are so small they give out little light, making them hard to detect.

Comments - One Response to “Carbon Star”