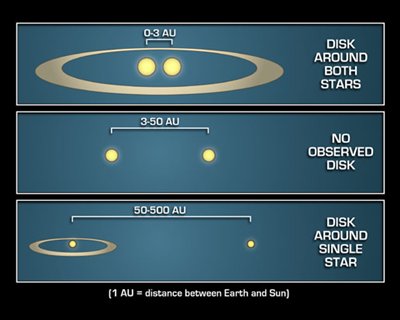 When two or more stars orbit each other, they are called star systems. A binary star is a star system which is made up of two stars that orbit a common center of mass because of gravitational attraction. The brighter and larger star is usually called the primary and the other one the companion star.

A visual star is a star system where the two stars can be seen through a telescope with the right resolving power. However, if the primary star is much brighter than its companion star, it can be difficult to detect a visual star.
An eclipsing binary star, meanwhile, is a star system with the two stars’ orbit plane lying nearly at the observer’s line of sight. It gives the illusion that the orbits form a horizontal line, making the stars undergo mutual eclipses.

If there is a star in space that seems to wobble without a companion star, then it may be an astro-metric binary star. Even though only one star can be seen, the wobble is meant to indicate that a smaller star is attracting the larger star.
Finally, the spectroscopic binary star is a system which has a very high orbital velocity, meaning the stars orbit each other very quickly. The stars themselves are very close and can be difficult to see through a telescope.