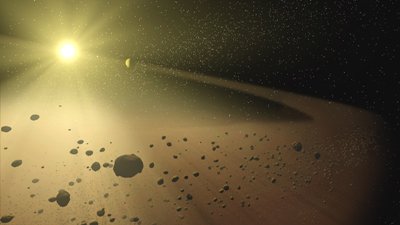 The Asteroid Belt is that area in the Solar System flanked by the orbits of Jupiter and Mars. It is what draws the boundary between the inner planets and outer planets. The belt is made up of countless asteroids, irregularly shaped bodies that revolve around the sun. Main Asteroid Belt is a more precise term for this region to distinguish it from Trojan asteroids and near earth asteroids.

The four largest objects in the belt are Ceres, 4 Vests, 2 Pallas, and 10 Hygeia. These four alone compose of more than half of the total mass of the belt. These are matters whose great mass are indicated enough of their diameters that range from 400 to 950 kilometers. When compared, the remaining bodies would look like dust particles.

The asteroids in the belt are thinly distributed that it is certainly possible to cross it without getting harmed. In fact, many space probes have done so and have returned to Earth safely. However, this does not mean that collisions between large asteroids do not occur. When they do, they often form asteroid families and create fine dust particles that contribute to the zodiacal light.

The asteroids found inside the main belt are categorized into three according to their spectra. The three groups are the C-type which stands for carbonaceous, S-type for silicate and M-type for metal-rich.

Comments - No Responses to “Asteroid Belt”