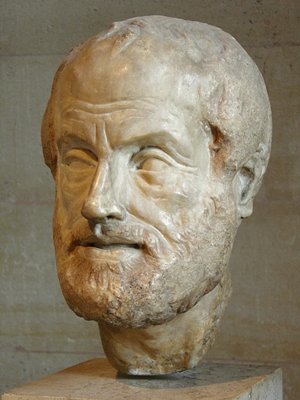 Aristotle is often touted as one of the founding fathers of science. Trained by the great philosopher Plato, Aristotle built a school he called the Lyceum at Athens. He delved into almost all dimensions of knowledge, including philosophy, science, art, literature, and of course astronomy.

At least Aristotle was right for one thing: the earth is round. He asserted this belief by arguing that when a person goes to the north or to the south, he or she does not see the same stars in the evening or the same positions of the sky in the day.

Aristotle grew up in a period where people believed in the presence of four basic elements: earth, air, fire and water. The astronomer, however, theorized that a fifth element, which he called aether, serves as the main component of heavenly bodies. He described aether as something that couldn’t be combined with other elements or reproduced. It is eternal, unchangeable, and has no sense of weight.
Aristotle also formed his own model of the solar system, wherein he included the planets Saturn, Jupiter, Mars, Venus, Mercury, the sun, and the moon. His concern in postulating this system was to make sense how heavenly bodies do not collide against one another.

Aristotle theorized that there are 22 counteracting spheres in the system, and these spheres set all the bodies in balance. Again, as we know it, this is wrong.

Aristotle did not have the devices to discover groundbreaking things about the universe, but he surely made significant contributions to astronomy simply by observing how nature behaved and always being inquisitive about the mysteries of the world.