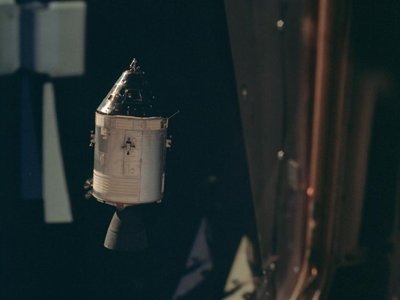 Launched on March 3, 1969, Apollo 9 was the first space flight with a crew and has both a lunar module (LM) and a command and service module (CSM). Its three-person crew consisted of Mission Commander Jim McDivitt, Command Module Pilot David Scott, and Lunar Module Pilot Rusty Schweickart. The objective of the mission was to test the several aspects of landing on the moon. This includes testing the functionality of the lunar module engines, the life support systems, the navigation systems, and putting into action the docking maneuvers.

This space mission left a great mark in space exploration history as it paved the way to history’s first crew transfer in space. This milestone feat proved that spacecraft designs of the Apollo were perfectly cut out to execute docking and transfer in space. Because of the blue wrapping that the spacecraft was covered in at Kennedy Space Center, the crew named Apollo 9’s command and service module as “Gumdrop” and its lunar module as “Spider”.

Apollo 9 was famous for the first ever spacewalk in human history. Schweickart wore the new and improved suit designed with individual life support. He then proceeded to performing the spacewalk. Scott, the pilot for the command and service module, was inside filming his fellow crew member Schweickart. It was through this spacewalk that the astronauts in Apollo 9 demonstrated the possibility of safely crossing from the LM towards the CSM and vice versa. It was an incredible act that can be carried out during emergencies Schweickart’s demonstration, however, was cut short when he began feeling sick. It was after all the first time that a spacesuit was tested outside the confines of the spacecraft. After ten days in space, the mission ended and the crew traveled back to earth. The flight had almost a perfect success rate accomplishing ninety percent of its goals.

Comments - No Responses to “Apollo 9 – Preparing for Moon Landing”