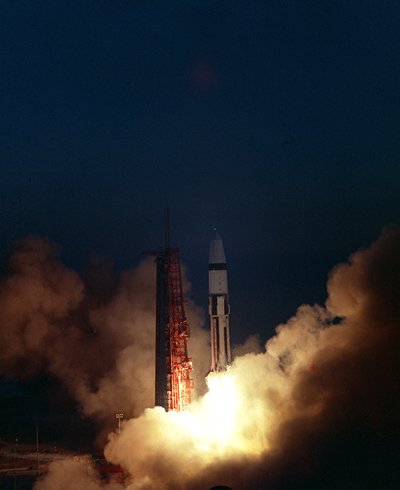 Launched on January 22, 1968, Apollo 5 was the first spacecraft in the Apollo Space Program that contains the Lunar Module. Similar to Apollos 2, 3, and 4, Apollo 5 had no astronauts manning it. The mission lasted 11 hours and the spacecraft managed to orbit seven times. The goal of this mission was to test in space the functionality of the first ever Lunar Module to be created. The other goal was to test the engine systems that are responsible for landing and lifting the spacecraft on the moon’s surface.

The Apollo 5 space flight executed the first ever “fire in the hole” to simulate an aborted landing on the lunar surface. This means that the rocket should be able to fire its ascent stage with the descent stage still fastened to it. This maneuver eliminated the need for a complete touchdown on the moon before being able to lift back up again. This is a very important ability for the spacecraft to perform especially when emergency rises and a lunar landing should be called off.

Apollo 5 experienced a long delay in its flight. One of the major reasons was the holdup on the Lunar Module. There was basically just a shortage of expertise and experience in building a spacecraft that can supposedly to land on the moon. Another reason was the problem in fabricating the custom-built parts as per the specifications in the design. Engines were malfunctioning and on top of that, there were complications in the ascent engine’s welding and construction. During testing, the module’s window shattered due to a pressurized cabin. The failure of the windows brought awareness to the design team and replaced the old acrylic glass material with solid aluminum plates.

After eight months behind flight schedule, Apollo 5 finally took off on January of 1968. It had a successful take off, orbited once and after the lunar module separated, it orbited twice. The descent engine was then fired after-wards and was quickly aborted by its programmed command module. It proceeded to the planned “fire in the hole” test and successfully, the ascent engine burned. After four more orbits, the remaining two stages were abandoned and the mission was over. Both the ascent and descent stages landed into the Pacific and decayed.