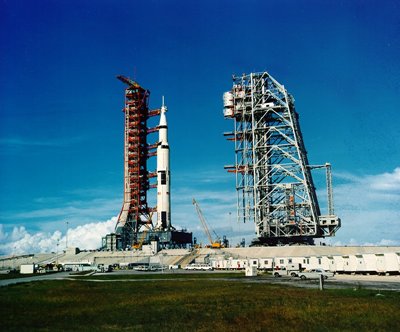 Apollo-Saturn 203 (AS-203) is sometimes referred to as Apollo 2. It was an unmanned mission that was launched on July 5, 1966 and was destroyed about six hours into the flight though it managed to orbit four times. The main purpose of its flight was to investigate the effects of “weightlessness” on the fuel in the S-IVB tank. It was this particular tank that the Apollo astronauts planned to use to boost them up from the earth’s orbit and towards the moon. The engineers wanted to find out the behavior of the fuel, which is liquid hydrogen, in the tank during take off. So inside the tank, they placed 83 sensors and two cameras to record whether the liquid would splash around or stay in one portion. Since nobody shall operate the spacecraft from the inside, there was no need for a command module.

The Apollo 2 rocket (S-IVB tank and instrument unit included) launched into a 188-kilometer circular orbit. The instrument unit was responsible for controlling the rocket during launching in the absence of the command service module. The flight led the scientists to conclude that the S-IVB can restart and the liquid hydrogen behaved as the engineers predicted it would. During its entire duration of orbiting, scientists observed the condition of the tank under extreme pressures. They found out that it has the ability to withstand so much stress and even surpassed its structural capacity. They were able to measure the amount of stress the tank was able to handle before it finally broke into pieces in space. Some of its fragments found their way back into the earth’s atmosphere and supposedly hit a German fishing vessel.

Even though the rocket did not last long, its goals were achieved and its mission was deemed a success. Scientists got their answers as to how the fuel in the tank behaved and because of this vital information they were able to anticipate its storage, handling, etc. Douglas Aircraft Company, the manufacturer of the S-IVB, made slight modifications to the tank and three months after Apollo 2 orbited the earth, declared that the new S-IVB tank was ready and fully operational to finally take man to the moon.

Comments - 7 Responses to “Apollo 2 – Learning the Effects of Weightlessness”