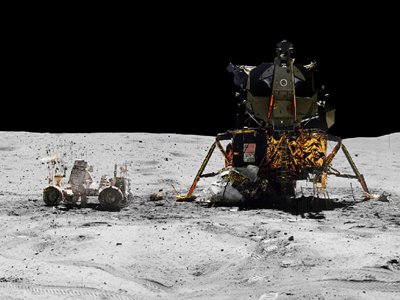 The success of the mission of Apollo 15 brought another J-class mission to the moon—the Apollo 16. The lunar probe, like the Apollo 15, lasted longer than three days. It also had three extra-vehicular activities. The aim of this mission was the same as the previous Apollo missions  640-802 including the first use of an ultraviolet camera on the Moon.

Launched in April 16, 1972 at 12:55 PM EST, the Apollo 16 mission was planned to land on the Descartes highlands, an undiscovered region on the Moon. This mission’s lunar landing was supposed to be aborted because of a malfunction on the command and service module Casper. But because of the low risk brought upon the space crew, the lunar module Orion was permitted to land on the lunar surface on April 21, 1972 at 2:23 Universal Time. From launching to landing on the moon, this cost the crew members three days of their mission.

John W. Young was the commander of Apollo 16, alongside with the command module pilot of Casper, Thomas K. Mattingly II, and the lunar module pilot of Orion Charles M. Duke Jr. Young and Duke explored their landing site, the Descartes Highlands. This region of the Descartes 640-816 crater on the moon was hilly and had two terrains, the Cayley Plains and the Descartes formation. The Cayley Plains were made up of flowing light plains while the Descartes formation was basically hilly. In this region, the two astronauts were able to examine the geologic features of the moon as stated on their mission.

The lunar roving vehicle, or simply the Rover, was again put to use for a total of 27 kilometers because of the success in utilizing it in the Apollo 15 mission. The Moon was also used for observing other celestial bodies. The command service module launched a sub-satellite while it was on the lunar orbit on April 24 at 21:56 UTC. It took that sub-satellite 34 days and 425 revolutions to orbit the Moon.

This mission contributed a lot to scientific researches concerning celestial bodies and space. Apollo 16’s mission came to an end on April 27, 1972 with a splashdown at the Pacific Ocean at 19:45 UTC.

Comments - No Responses to “Apollo 16′s Contribution to Science”