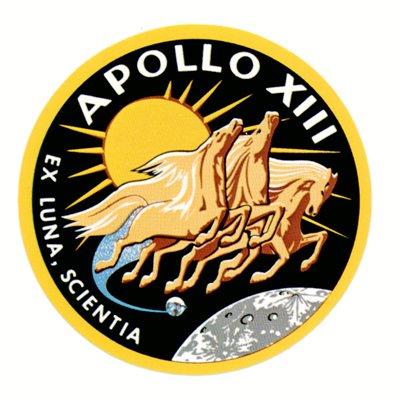 Like Apollo 12, Apollo 13 was supposed to have a precision landing. Unfortunately, a problem with the oxygen tank occurred. Their oxygen tank burst which induced damage to their spacecraft. They were forced to abort their mission of precision landing and were only asked to orbit the moon. This was the first aborted mission of the Apollo Space Program.

Apollo 13 was launched on April 11, 1970 at Kennedy Space Center at 2:13 PM EST. Their intended landing site was the Fra Mauro highlands. This became the landing site for Apollo 14 since their mission had failed. Two days after the launch of their mission, the crew members turned on their oxygen tanks which exploded and caused an electric shutdown on Odyssey, their command and service module. Nevertheless, Odyssey was still able to function and to support them during the last few hours of their mission. The lunar module, Aquarius, spared their lives as it became their main vehicle back to Earth. But another crucial problem appeared when lithium hydroxide was exhausted and could not remove excessive carbon dioxide inside Aquarius. What they did was to put links to Odyssey and Aquarius. This enabled them to survive the space for six days.

The astronauts who had a hard time during the mission were Commander in Flight James A. Lovell, Jr. along with the Command Module Pilot of Odyssey, John L. Swigert who was called to substitute an original crew member Thomas K. Mattingly, and the Lunar Module Pilot of Aquarius, Fred W. Haise, Jr. They returned back to Earth on April 17, 1970 and had a splashdown at exactly 1:07 PM EST.

This failed exploration garnered popularity. It was used in movies like ‘Houston, we have a Problem’, which was Swigert’s infamous line during the mission, and ‘Apollo 13’, which was adopted from Jim Lovell’s book, the ‘Lost Moon’. There was even a miniseries like ‘From Earth to the Moon’ which aired scenes related to the failed mission on the episode ‘We Interrupt This Program’.

The Apollo 13 mission may have failed but the lesson it brought humankind was considerable. It taught us not to stop learning and applying what we had learned. This failure was a sign that we should continue sending missions for greater understanding and knowledge of the space.