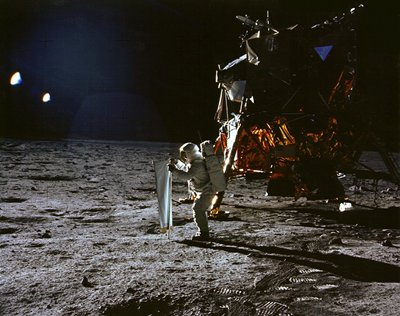 Apollo 11 is the most renowned mission of the Apollo Space Program. It enabled man to land a spacecraft and walk on the Moon. Apollo 11 was the first G-type mission in history. It was followed later by Apollo 12 and 14. A G-type mission was one of the seven types of missions 640-721 in space that was characterized by a manned lunar landing.

It was actually under the presidency of John F. Kennedy that these space missions materialized and occurred under a session of the US Congress. The late president’s goal was to land on the moon by the late 1960’s. This goal was achieved by Apollo 11 on July 20, 1969 when the astronauts were able to set their feet on the Earth’s nearest celestial body—the Moon. Apollo 11 took off on July 16, 1969 using a Saturn V rocket, which was the same to what the Apollo 10 used, at Launch Pad A of the Launch Complex 39 at 9:32 GMT. It had a Command/Service Module named Columbia and a Lunar Module named Eagle.

This crew consisted of an experienced team. These three had become popular for the success of their mission, namely, Neil A. Armstrong, also an accomplished professor and engineer, Michael Collins, a revolutionary leader, and Edwin ‘Buzz’ E. Aldrin, an engineer and air force pilot. They were the commander in flight, the command module pilot and the lunar module pilot respectively.

The crew had been able to provide color television transmissions which include their food preparations, Columbia housekeeping and other spacecraft 640-760 essentials. On July 20, they separated Eagle from Columbia. Eagle, carrying Armstrong and Aldrin, touched down on the lunar surface at exactly 4:40 GMT at the Sea of Tranquility. At 10:56, Armstrong took the famous first step on the moon. He was then followed by Aldrin after a few minutes.

The mission’s space exploration on the moon was very successful. It had reached its objectives. It was able to document everything they had discovered. This was also the signal and the start of other more extensive explorations on the moon. On July 24, Apollo 11 victoriously splashed down at the Pacific around 12:50 PM.