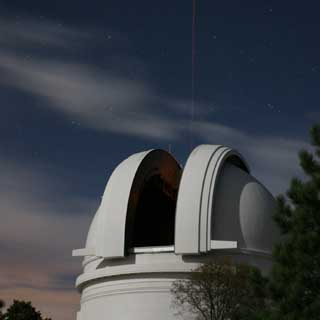 Adaptive optics is a technique employed that allow ground-based telescopes to adjust for the blurring effects of the Earth’s atmosphere. These distortions are called wave front errors. When light from a star enters the Earth’s atmosphere, it gets distorted by a variety of factors such as temperature differences between the atmosphere’s layers, wind and many other things.

The Hubble telescope, being up in orbit, is free from this distortion that why it gives sharper images than ground telescopes. With adaptive optics, however, astronomers are already able to replicate the sharpness the Hubble telescope can produce.

Adaptive optics works by using a small deformable mirror or liquid crystal array to correct for wave front distortions. First, light enters a detector that determines the shape of the wave fronts. The information gathered here is used to directly compute instructions for the deformable mirror to correct the errors. Then, the corrected light continues its journey to the rest of the telescope. With the capability to adjust the deformable mirror at a thousand times per second, this system works very fast to compensate for the very rapid changes in the atmosphere.

This technique has found wide scientific applications such as the study of weather in outer planets, the hunt for small space objects such as brown dwarfs, and details about how a star is born.

Comments - One Response to “Adaptive Optics”