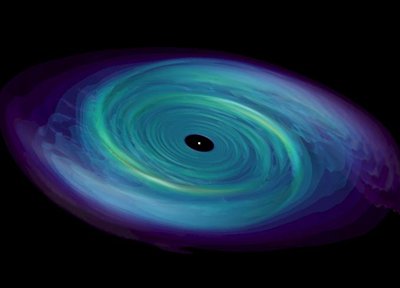 Accretion disk results when matter, such as gas, from a stellar body spirals toward another central body due to gravity. To more clearly understand the phenomenon, take two bodies orbiting each other – in this case, take a very dense neutron star and a medium-sized yellow star like our sun. Through gravitational effects, some gaseous matter from the yellow star can be sucked by the more compact neutron star towards itself.

However, instead of falling to the neutron star in a straight path, the gaseous matter takes a spiral path. This is because of the initial angular momentum that the bodies have when they were still orbiting each other.

The spiral happens much like when water spirals down the drain. Now, the radius of the spiral gets smaller and smaller as it approaches the neutron star. This causes the material to pile in a dense collection of matter called the accretion disk. The dense disc heats up due to friction with other matter. It eventually loses angular momentum and falls down to the neutron star. Since this gas is being accelerated, it emits electromagnetic waves that astronomers detect and use to study the accretion disk. These disks are encountered majorly in binary star systems and active galactic nuclei, but they also occur in a lot other places.

Comments - No Responses to “Accretion Disk”