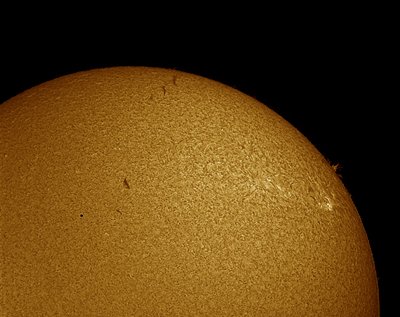 The atmosphere of Mercury is a tenuous exosphere that contains varying elements. The elements contained in Mercury’s exosphere are helium, hydrogen, oxygen, sodium, calcium, potassium and water vapor. The comet-like tail that is seen on the end of the planet is created by atmospheric gasses that are pushed by solar light. Sodium is the primary element located in its tail. Mercury’s tail extends very far from the planet. Other elements in its tail include traces of calcium and magnesium but these do not extend as far as the sodium tail do.

Before 1974, the existence of an atmosphere in Mercury was a topic that produced heated debates. Because Mercury is too close to the Sun, it was very hard to study. It wasn’t until the Mariner 10 spacecraft discovered the exosphere of Mercury’s atmosphere. The data gathered by the Mariner 10 spacecraft confirmed that only an exosphere existed on Mercury and is similar to the Moon in having no atmosphere. On 2008 the Messenger spacecraft found magnesium in its exosphere.