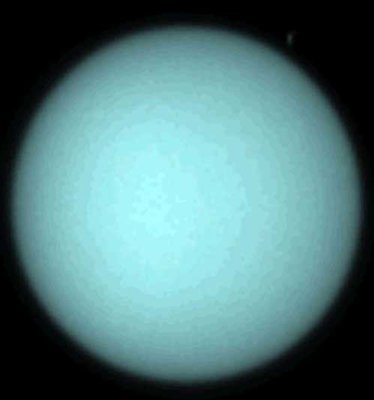 Although Uranus is not the farthest planet from the Sun, it is the coldest planet in the Solar System. Like its neighbor, Neptune, Uranus is an ice giant, meaning it does not have a solid surface and what is called its ‘surface’ is actually a layer of clouds that lies above what may be a layer of liquid water and a core of rock at the center of the planet. Uranus is 14.5 times bigger than Earth, making it the third largest planet in the Solar System after Jupiter and Saturn; Uranus’s core alone is as large as our planet. The atmosphere of Uranus is composed of 83% helium, 15% methane and 2% methane plus trace amounts of other gases such as ethane.

The average temperature of the surface of Uranus is 49° Kelvin or -224° Celsius. What makes the planet so cold is that it has a low internal temperature. At its core, Uranus is only 5000° K, compared to Jupiter, which as a core temperature of 30000° K. The reason for Uranus’s lack of internal warmth is unclear, although scientists speculate that it is related to its unusual axial tilt that is completely unlike the other planets of the Solar System; the planet rotates at an angle of 99 degrees. Uranus may also have experienced a massive collision early in its history, which could also have allowed it to release much of its internal warmth.

Although it was previously believed that Uranus was climactically a bland planet, recent observations from the Hubble Space Telescope have shown that the planet actually has dynamic weather patterns. Uranus is swept by huge wind storms, with wind speeds reaching as much as 900 km/hr although it receives much less energy from the Sun than Earth. One storm, dubbed the Great Dark Spot, is as large as the diameter of Earth or approximately 13,000 km long.