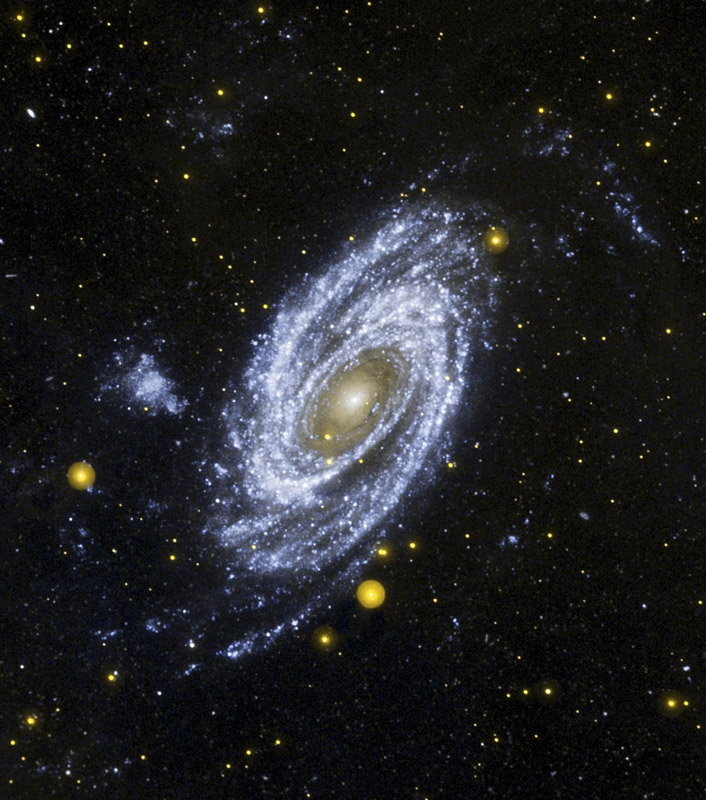 A star is a large mass of plasma matter held together by gravitational forces. Near the end of its life a star can also have a significant portion of degenerate matter. Sun is the star nearest Earth. At night other stars become visible when not obscured by the Sun’s light or atmospheric interference. In the past, the brightest stars were labeled as constellations or given proper names. Today as many as 88 constellations are identified by astronomers and used to map the sky. Stars provide light and energy for the Universe. The constant birth and death of stars over long, long periods of time create heavy elements necessary for the creation of life.

While all stars appear to be white when observed at night, they actually appear in different colors when examined closely: yellow, red, blue, brown, or orange. The Sun is a yellow dwarf star.

By observing the motion, spectrum, and luminosity of a star, astronomers can determine its age, mass, chemical composition, and many other properties. The primary factor in determining the type of evolution a star goes through is its total mass.

While the Sun is a solo star, there are many multiple-star systems in the Universe. The center of some stellar systems can contain as many as two to six stars all revolving around each other.

Life Cycle of a Star

A star will typically form from a nebula, a gaseous cloud with some combination hydrogen, helium, and dust. When the core of a star becomes dense enough, some hydrogen will fuse into helium. The compression for this to occur is typically caused by the gravity of a nearby star or a shockwave from a supernova. The material in the cloud then starts to form a dense region known as a protostar, which slowly heats up as it grows. Once it acquires critical mass it will be able to support nuclear fusion. This is the beginning of a star, and the beginning of the phase called the main sequence. 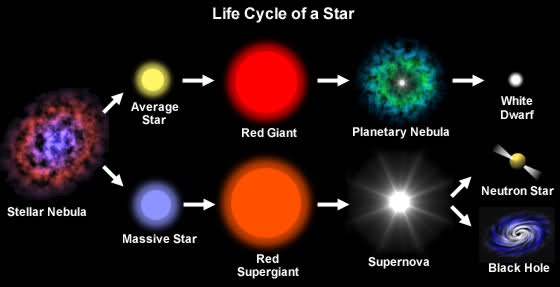 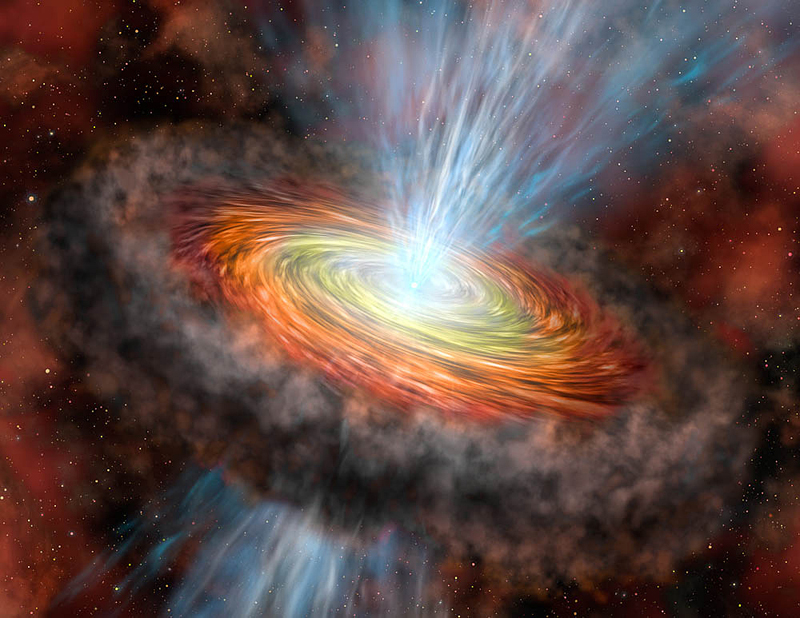 The star will remain in the main sequence for a long time, about 90% of its lifetime, though how long that is depends on its total mass. Very large stars tend to burn all of their gases faster than smaller, more stable stars. A large star may typically burn for a few hundred thousand years, as opposed to billions of years for smaller stars. Red dwarfs, for instance, can last tens of billions of years, but since the age of the universe is about 13.7 billion years, no red dwarfs are expected to have completely died out yet.

In the main sequence phase, a star burns by fusing hydrogen and producing helium at the high-temperature, high-pressure conditions in the core. The growing helium concentration in the core increases a star’s luminosity and temperature over time. For instance, the since has increased in brightness by almost half since its main sequence first began about 4,600,000,000 years ago.

Every star produces a stellar wind of neutral and charged gas particles blowing into space. This is a tiny amount of lost mass, which for the Sun is less than a percent of its initial mass while burning gases in its core. Some stars as large as fifty Suns could lose as much as 50% their total mass over their lifetimes.

The heavy metal composition can also affect a star’s lifecycle. Heavy metals are produced as a star ages. A second generation or higher star that is born from the legacy of dead stars tends to have higher amounts of heavy metal. These metals can affect the duration of a star, the stellar wind’s intensity as well as the formation of stronger magnetic fields.

When a star nears the final stage of its life, it expands. Some become red giants while massive stars become supergiants. When a star’s fuel runs out completely, nuclear reactions will stop in the star’s core. What happens is that the pressure once stabilized by nuclear fusions will become weaker than the powerful force of gravity, which causes the star to start collapsing on itself. What happens next depends on the size of the star.

An average-sized star will shed a planetary nebula, a glowing shell of ionized gas that would eventually make new stars. The remaining core becomes a white dwarf that burns for the remainder of its life, at the end of which a dim, black dwarf will remain. A star about 1.4 times the mass of the Sun will collapse into what is called a neutron star as protons and electrons blast into each other, creating neutrinos & neutrons with burst of energy. The shockwave produced by this initiates a supernova, a very massive stellar explosion. Supernovae can be the brightest or one of the brightest phenomena to observe in space; they can outshine their entire home galaxies at times. A star more than three solar masses will also initiate a supernova and may leave behind a black hole, a region with gravity so intense that light cannot escape.

A nebula created from the life cycle of a star will continue to expand for millions or billions of years. However, this material is just what is needed to create new stars again, as long as a catalyst such as a passing gravity field or a supernova shockwave causes the cloud to condense. These many cycles of the life and death of stars create heavy elements like those required to produce rocky planets as well as support life. Our solar system, for example, was born from a second or third generation nebula that had an overabundance of heavy elements. One could say that we are made of star stuff. Everything we see was created by a nuclear reaction in a star or a supernova at one point in time.

The Nuclear Power of a Star 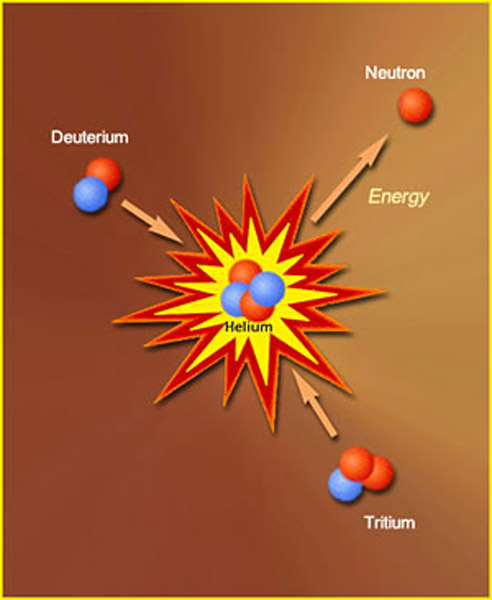 The power of a star is generated by the process of nuclear fusion of hydrogen in the core, producing helium and releasing energy that radiates into outer space. This process involves the fusion of two hydrogen ions, or two protons. There are two main isotopes of hydrogen atoms that concern stellar nuclear fusion: deuterium which has 1 proton and 1 neutron, and tritium which has 1 proton and 2 neutrons. The fusion of these creates a helium atom (2 protons & 2 neutrons) and an extra neutron plus a large release of energy.

Another process is the CNO cycle where carbon is converted into nitrogen, then oxygen, which convert hydrogen into helium. When a star’s hydrogen reserve is all burnt out, helium will begin converting into carbon and oxygen. A large enough star will continue further nuclear fusions and chain producing heavier elements, up to iron. The extremely high energy conditions that are caused by continuous nuclear fusion reactions inside stars are responsible for creating elements as massive as iron.

When a stellar core reaches a certain proportion of iron, nuclear fusion will cease because the energy required to fuse iron atoms is far greater than what is produced by a star. The inner pressure of gravity becomes too strong and the star collapses. It will either collapse into a neutron star, a white dwarf, or a black hole. A supernova may occur. The ultimate fate of a star depends on its total mass, to state simply.

Almost all naturally occurring elements are created from nucleosynthesis during the lifetime of a star as well as during supernovae explosions at the end of a star’s life.

What are SI Units of Measurement for Stars?

When comparing and measuring stellar objects, parameters relative to the Sun are used. For example, a star three times the size of the Sun has three solar masses. The standards for mass, luminosity, and radii are as follows: 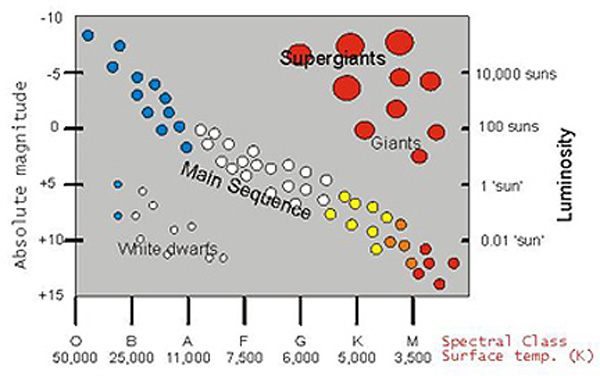 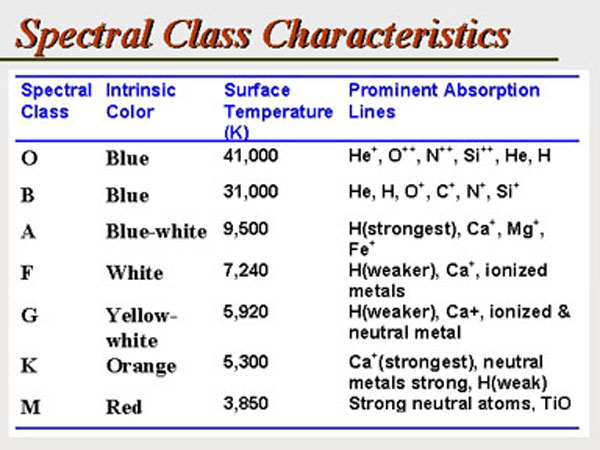 Around 1912, two astronomers named Ejnar Hertzsprung of Denmark and Henry Norris Russell from the U.S. each independently came up with the temperature of the star. They worked together however, to explain the luminosity and the temperatures of stars in a diagram. The chart below summarizes the diagram. “Color” is the spectral class, not the actual color of stars.

Characteristics of a Star

The initial mass of a star could determine many of its characteristics. Qualities such as size, luminosity, and lifespan depend on a star’s initial mass. 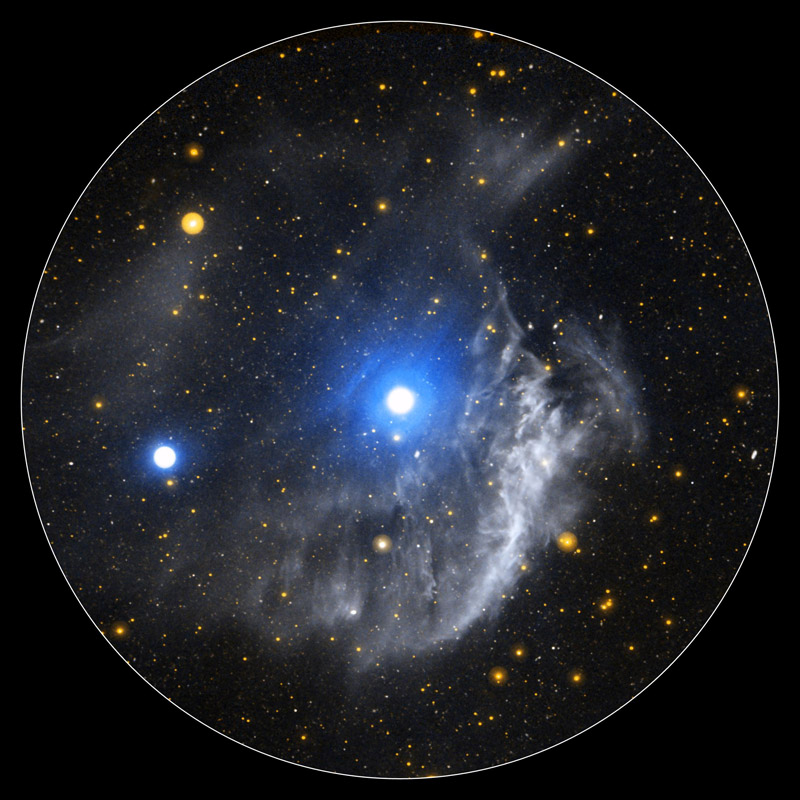 Many stars are ten or less billion years old. The oldest discovered is about 13,200,000,000 years old (compare to 13,700,000,000 years for the Universe). More massive stars tend to live shorter. With higher core pressures, they burn their fuel much more rapidly than smaller stars.

Stars formed in our galaxy, the Milky Way, are typically comprised of 71% hydrogen, 27% helium, and the rest other elements or heavy metals. Heavy elements are estimated by measuring iron content, since it is more common and its existence is correlated with heavier elements.

All distant stars appear to twinkle when viewed by human eyes because of an effect created by the Earth’s atmosphere. Most stars are too small in angular size to be examined with current telescopes. One technique is to measure the brightness decrease of a star when it is obscured by the Moon in order to find a star’s angular diameter. 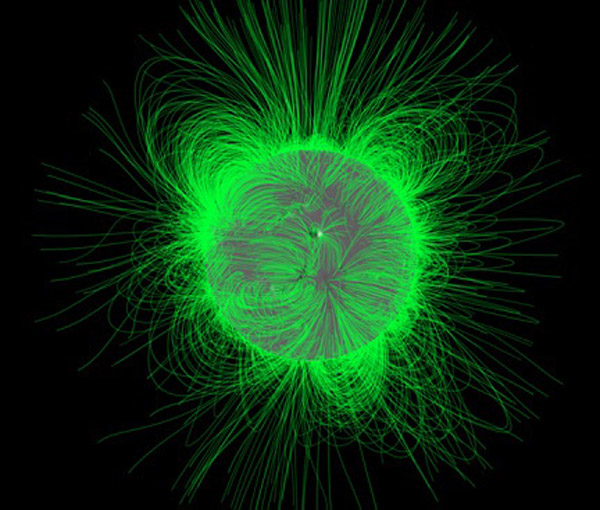 There has been much speculation about the largest mass a star could have in the Universe. A star of 100-150 solar masses can be considered massive. Stars of this magnitude tend to last only a few hundred thousand to a few million years at best. In the current evolution of the Universe, a star 150 times the size of the Sun can be considered extremely large, perhaps the maximum size. Despite this, a star has been found with about the size of 265 solar masses, contradicting the theory. Stars that existed post Big Bang were thought to be 300 times the mass of the Sun because of the lacking existence of heavy elements. Stars of this caliber are believed to have been long extinct, however.

The speed of rotation of a star could be estimated by measuring the angular velocity of starspots. Stars tend to rotate faster around the equator than at the poles. The critical velocity of a star’s rotation is said to be three hundred km/s, when a star would actually tear asunder. The Sun at its current age rotates with an velocity of about 2km/s at its equator, giving it a complete rotation every few 25-35 days. The magnetic field as well as stellar wind of a star could slow its rotation by great amounts as it gets older. 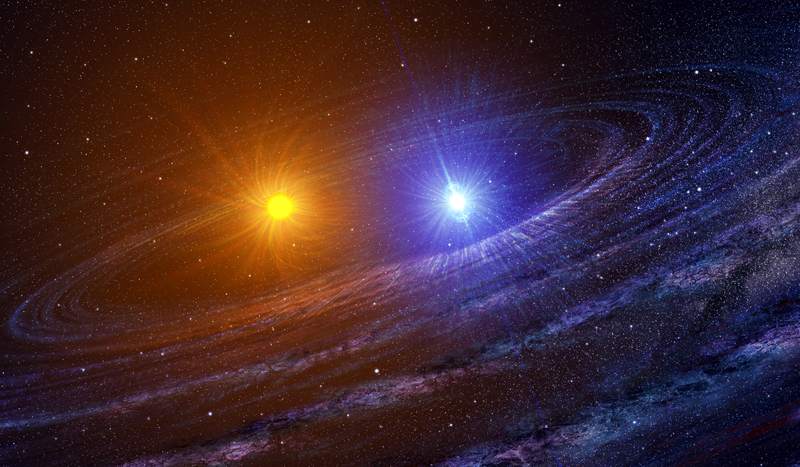 Smaller stars theoretically should rotate very rapidly due to compact mass. However, according to the law of the conservation of angular momentum, they might actually have lower rotation speeds than what is expected. Theoretically, smaller stars rotate faster because they have smaller radii. However, the conservation of energy holds true, by way of the fact that the loss of expected angular momentums is made up through greater stellar wind activity. Despite this, the Crab nebula contains a pulsar that was found to be rotating at 30 revolutions per second.

Temperatures on a star depend on distance from the center. The center of a star can be found on the scale of millions of kelvins. The temperature at the surface varies depending on the amount of energy produced and the size of the star. The star color index is a very popular method of estimating the surface temperature of stars. Some massive stars can be as hot as 50,000 kelvins on the surface, where small stars, the Sun for example, might only measure at the scale of 1000s of kelvins. Red giants also have low temperatures at the surface but have high luminosity because of their large size.

Comments - No Responses to “Star”