Organization in science is a must. When trying to classify, scientists call this the study of classification or taxonomy. Well, in terms of astronomy, there is also organization. And one of these classifications is called the spectral class.

Spectral class or spectral classification is the manner of organization in astronomy that deals with classifying stars according to brightness or luminosity, or through the spectrum or color of the star’s chromospheres. 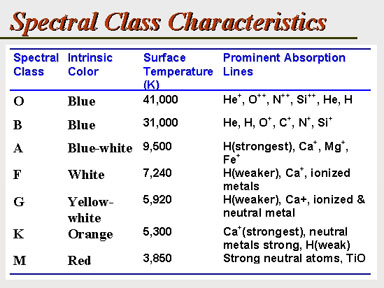 In learning how to classify stars, the best way to check is through color. In this classification, there are different levels of a star’s chromospheres colors. This is none other than the Blue, Blue-White, White, Yellow-White, Yellow, Orange and Red. This is known as the O, B, A, F, G, K, and M classes. Furthermore, a certain star’s color determines its age. When the star has a blue hue, it clearly means that the star is still young. The oldest and most probably dying star is the M or red colored stars. To better easily understand the color levels, it is usually interpreted as “Oh, Be A Fine Guy/Girl, and Kiss Me”. Adding on this, the levels also determine how hot and bright the star is, with blue as the hottest and red as the coolest and dimmest of all stars.

This type of classification may be old, but it is the basic of other stellar classifications used. The current system used is the Morgan-Keenan System, which classifies a star also by spectrum type, though it is based on a 0 to 9 scale.

Comments - No Responses to “Spectral Class of Stars”