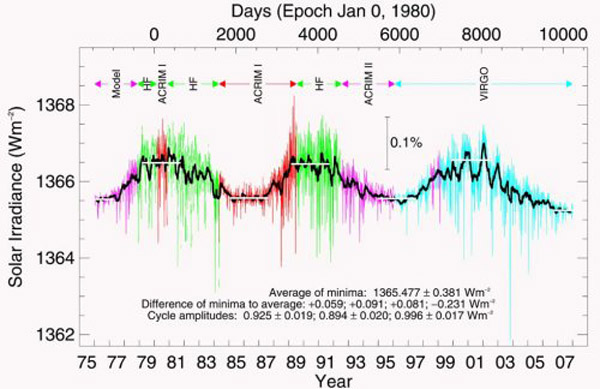 Solar irradiance is an astronomical term which is used to refer to the amount of energy emitted by the Sun over all wavelengths that fall per second on 11 sq ft outside the Earth’s atmosphere. In simpler terms, it is the amount of radiant energy coming form the Sun which human beings are able to see. It is the radiant energy which is sent directly towards the Earth.

The solar irradiance is an influential factor to the Earth’s weather and climate patterns. However, its exact relationship to the worsening climate changes such as global warming is still a subject of deep scientific research and studies.

The amount of solar irradiance that is directed towards Earth is commonly referred to as the solar constant with an approximate value of 1,367 watts per square meter. Its value is determined to be a variable since more advanced instrument are used in 1978. What could possibly be the constant is the 0.04% decrease on its value annually.

The amount of solar irradiance that is emitted by the Sun in all directions is otherwise referred to as the solar luminosity. Its value is approximated at 3.8478 x 1026 watts. Some groups of astronomers believe that the variations in solar luminosity have better correlation to the Earth’s worsening environmental conditions including global warming.

Scientists have also attributed solar irradiance to other astronomical phenomena such as oscillations, granulations, Sun spots and the solar cycle. Instruments installed within space probes allow them to acquire better understanding of the variations in total solar irradiance.

Comments - No Responses to “Solar Irradiance”