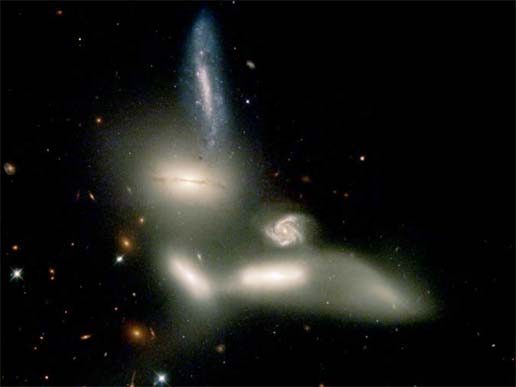 Seyfert galaxies are a particular class of galaxy where each nuclei produces spectral line emissions of highly-ionized gas. A Seyfert galaxy is always known to be spiral in nature, and is always among the most intensively studied in the field of astronomy because they are supposed to be theoretically near our own Milky Way.

They are also thought to have low-luminosity versions observed in quasars. The massive black hole within the nucleus of the galaxy that is sucking up gas from the surrounding environments is thought to have powered the galaxy itself. We may not see that big black hole itself, but ultraviolet continuum radiation presumed to be thermal emissions from the hot gas forming an accretion disk around it makes it detectable.

Seyfert galaxies are named after astronomer Carl Keenan Seyfert who was the first to identify the galaxy class back in 1943. The centers of these galaxies form up a subclass containing active galactic nuclei, or AGN. These are areas thought to house those super massive black holes.

A Seyfert galaxy is characterized by tremendously bright nuclei, and the spectra that display bright emission lines containing hydrogen, oxygen, helium and nitrogen. These lines specifically exhibit a strong Doppler broadening, with velocities ranging from 50 to about 4000 kilometers per second. Experts believed such streaking lines to have originated near an accretion disk that had surrounded the black hole itself.

Aside from that, Seyfert galaxies also display strong infrared, X-ray and ultraviolet emissions. Only small portions of radio waves are currently detected and are believed to be synchrotron emissions. Just like other types, the infrared emission is largely due to the radiation of the other bands reprocessed by dusts nearby the nucleus.

Comments - No Responses to “Seyfert Galaxy”