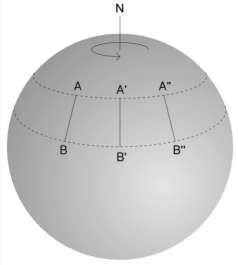 A Rotation is the circular movement of an object around a point. It is the act of rotating or turning around. In astronomy, it is a phenomenon that various celestial bodies experience. Stars, planets and other celestial bodies all spin around on their axis. The rotation rate of planets in the solar system was first measured by tracking visual features. The stellar rotation is measured using a Doppler shift.

This rotation induces a centrifugal acceleration in the reference frame of the Earth, which is slightly counteracting the effect of gravity. The only effect is one weighs less at the equator. Another is that the Earth is slightly deformed into an oblate spheroid.

The Sun also rotates around an axis which is perpendicular to the plane of ecliptic. The Sun’s rotational axis is tilted at 7.25 degrees. It rotates in a counter clockwise direction. The Sun’s rotation period varies with latitude on the Sun since it is made of gas. Equatorial regions rotate faster than Polar Regions.

The Earth is rotating around an axis some which makes objects rotate about a horizontal axis, like a rolling log. Some objects, such as a skater, rotate about a vertical axis. The Earth’s axis is tipped over about 23.5 degrees from vertical.

Earth’s rotational axis points are following a direction that is relative to the stars. It is because of this that the North Pole points towards the star Polaris. Let us think of the Earth as a spinning top, tipped over to one side. Over very long time periods the direction of Earth’s axis slowly changes due to precession.

Comments - No Responses to “Rotation”