Redshift is an important concept in astronomy that is used to describe the distance of a far away object. As a term in physics, redshift refers to the change in the frequency of a photon from higher to lower energy and accordingly from shorter to longer wavelength. In simple terms though this just means that wavelength of the light is stretched so much that one can observe the light to shift towards the red part of the spectrum, which is known to me composed of longer wavelengths. 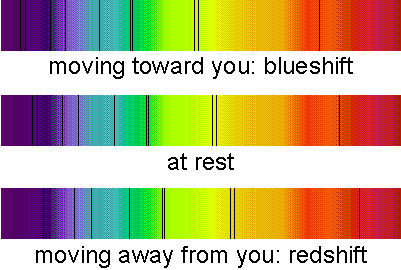 To understand it better, a comparison with a similar phenomenon in sound waves called Doppler Effect is used. Imagine that you are riding in the car moving towards the north when suddenly an ambulance passes by going in the opposite direction. You will notice that as you and the ambulance move closer to each other you will hear a higher frequency of the siren while as you move farther away from each other, you will hear a lower frequency of sound. Light behaves in a similar way because it has wave-like properties.

With regards to astronomy, the universe has been known to be continuously expanding and along with it galaxies tend to move away from us. Accordingly, the light emanating from these galaxies is redshifted or change into longer wavelengths. This shift isn’t observed by the naked eye and is usually measured by comparing the spectrum produced by this light to that of a reference laboratory spectrum. By comparing the spectrum to known wavelengths, astronomers are able to determine the redshift occurring from these distant sources.

Comments - No Responses to “Redshift”