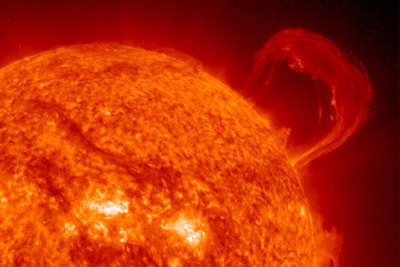 Prominence refers to the sun sending out tongues of fire that reaches a great distance. It is usually called solar prominence.

It is defined as a large and bright extension from the sun. It extends from the sun’s surface, usually in the shape of a loop. It is found that a prominence is usually starting from the sun’s visible layer called the photosphere, and then extends to the outer layer called the corona. Though the corona is composed of different and extremely hot ionized gases, commonly known as plasma, it does not emit enough visible or radiant light.

Prominences also have much cooler plasma, similar to that in the chromosphere. Furthermore, this phenomenon normally happens and forms over a day’s worth of time. Stable prominences can also take a much longer duration and can also linger for months in the sun’s corona. With too much of this stable prominence, it can also lead to having an event called coronal mass injections, wherein radiant light and gas is ejected from the sun.

Scientists are still studying on the nature and cause of having solar prominences. It has also been discovered that these type of phenomenon can reach different distances and even thousands of kilometers long. So far, the longest solar prominence recorded was sighted by the SOHO or Solar and Heliospheric Observatory, launched into space in the year 1995. The longest recorded solar prominence was in the year 2010, with a distance of 700,000 kilometers. It is roughly the sun’s radius.