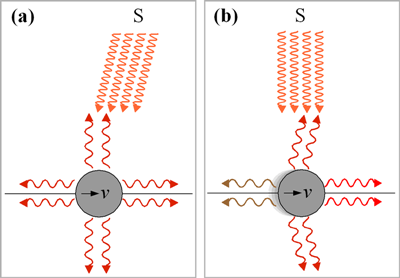 The Poynting-Robertson effect is the radiation pressure produced by the Sun’s rays striking the small particles orbiting it, causing them to slow down and spiral towards the gigantic ball of fire. More specifically, this refers to the Sun’s radiation and gravity working together to form an interstellar giant vacuum that sucks in tons and tons of galactic dust grains daily. It is because of its action that this effect is also sometimes called the Poynting-Robertson drag.

The Poynting-Robertson effect is named for the two men who first described the effect in 1903—John Henry Poynting and Howard Percy Robertson. It can best be likened to raindrops striking a speeding car. You may not feel it much, but the rain does slow the car down slightly. The same is true with the Sun’s radiation pressure falling on particles in space. It slows the particles down by working tangentially from the direction of the particles’ orbital motion, thus lowering their angular momentum. But while these particles are pulled gradually into the Sun, their orbital speeds do not falter and are instead continuously increasing.

These dust particles would then join the large disk-shaped cloud already orbiting the Sun between the orbits of Venus all the way to the asteroid belt between Mars and Jupiter. The Poynting-Robertson effect is also believed to give evidence that our solar system is quite young. For if it were old, we wouldn’t have as much interplanetary dust as we do now since the Poynting-Robertson effect would by then have caused most of these particles to spiral completely into the sun.