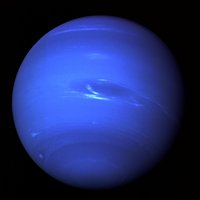 1. Neptune is the fourth largest planet in the Solar System.

2. Neptune is a gaseous planet, composed of hydrogen, helium, methane, with traces of ammonia and water.

4. The only spacecraft ever to visit Neptune was Voyager 2 in 1989.

5. In Roman mythology, Neptune is the god of the sea.

6. Neptune has strong winds which is more than any other planet in the Solar System. Winds on Neptune can get up to 2,000 km/hour (1,200 miles/hour). “The Scooter” is a cloud that moves around Neptune about every 16 hours.

7. The blue color of the planet is due to the absorption of red light by methane in the atmosphere.

14. Neptune has 13 moons, the largest of which is named Triton. The other moons are: Naiad, Thalassa, Despina, Galatea, Larissa, Proteus, Nereid, Halimede, Sao, Laomedeia, Neso, and Psamathe.

15. Neptune has five main rings, they are named after the people who had been doing work on the planet; the rings are: Halle, Le Verrier, Lassell, Arago, and Adams.

17. Neptune is the farthest planet from the Sun.

18. Neptune was the very first planet to be located using mathematics rather than observation.

19. The planet is never capable of being seen by the naked eye.

20. In 1898 Voyager 2 conducted a flyby of Neptune and confirmed the presence of a magnetic field around the planet. It also found that the field was tilted like Uranus’. Voyager 2 also discovered six new moons that orbit Neptune and that the planet has more than one ring.

21. The planet is so far from Earth that it took Voyager 2 twelve whole years to get to it.

22. Neptune is notorious for being the stormy planet. Sometimes winds can reach up to 1,240 miles per hour.

23. Neptune emits its own heat at a rate of 2.7 times more than the energy that it absorbs from without.

24. The planet is 30 times farther from the Sun that our planet is.