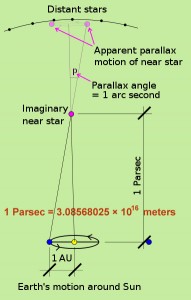 Astronomical objects are very far and located in space that may be way beyond our imagination. We can only view stars from afar and often think about how far they really are from Earth. Despite the lack of possibilities of measuring these astronomical bodies up-close, astronomers and astrophysicists have devised a way to determine how far they are from our planet. The distance is often expressed in parsec, abbreviated pc, a unit of measurement that is equivalent to the parallax of one arcsecond.

Parallax is the model of measuring these celestial bodies by observing their apparent direction at two different lines of sight, say one in January and the second in July. The intersection of these two lines of sight is the astronomical object itself and is half the angular measure of parallax. When the inverse value of parallax which is measured in arcseconds is taken, the distance in parsec is obtained for the particular celestial body being observed.

The use of parallax is the most basic calibration step in measuring distances in the field of astrophysics. However, the limitations of a telescope allow only the observations on astronomical objects that are up to 100 parsecs away from the Earth. The first successful attempt of measuring a celestial object by means of parallax was carried out by a German named Friedrich Wilhelm Bessel who made an observation on 61 Cygni. His trigonometric calculations are the basis for the calculation of parsecs.

About 4.85 x 10-6 pc is the equivalent of one astronomical unit and one parsec is equal to 3.262 light-years. The concept of parallax and distances in parsecs remain to be one of the most useful ideas in astronomy.

Comments - No Responses to “Parsec”