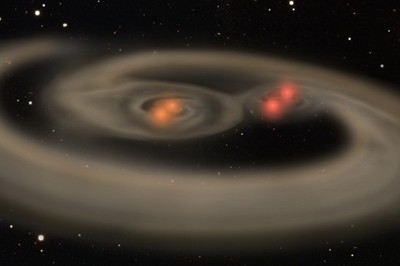 For thousands of years, ancient civilizations have thought of the earth as the center of the solar system. Had Copernicus failed to challenge this belief, Galileo would not have concluded that the solar system is indeed heliocentric. If his proponent theory gathered much of a dispute, imagine the disbelief it would cause by suggesting that there are other systems in the universe, more so some even have two or more Suns.

There are even planets outside this galaxy that experience three sunsets, because they orbit around three central stars. This is an example of a multiple star system, where in some have tri-nary, quarternary, quintuple, sextuple, septuple stars, depending of the number of stars the system contains. Binary star systems are the most common, and follow elliptical orbits, under the influence of each other’s gravity.

Some binary systems are so close to each other that transfer of matter becomes possible, reshaping the way they look after quite some time, making evolution a constant change. Triple star systems have two stars that orbit at a close range, while the third orbit around the first two. Actually, most stars visible in the night sky belong to multiple star systems revolving around a center of mass. About 80% of the stars are part of multiple star systems.