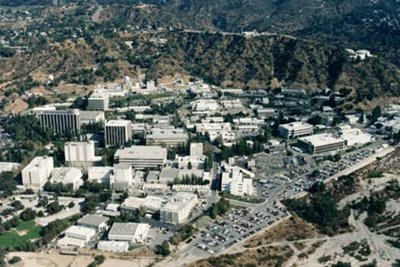 JPL (Jet Propulsion Laboratory) is a research and development field center in Pasadena, California. Funded by the federal government under the management and operation of Caltech under contract with NASA, the primary function of JPL is the construction and also the operation of robotic spacecraft for planetary, Earth-orbit and other astronomy missions.

JPL began its work in 1936 when the first batch of rocket experiments was carried out in the Guggenheim Aeronautical Laboratory, part of the California Institute of Technology (GALCIT). Since then, JPL has run projects which include the Galileo mission to the largest planet in our solar system Jupiter and its moons and the Mars rovers in 1997 and 2003. Unmanned missions to all planets in our solar system have also been undertaken by JPL along with extensive mapping missions of the earth and management of the worldwide Deep Space Network. Current projects include the Mars Reconnaissance Orbiter, the Cassini-Huygens mission to the planet Saturn, the Spitzer Space Telescope, and the Dawn mission to the stars Ceres and Vesta.

A Visit at JPL