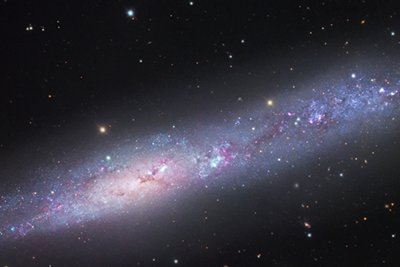 We know of galaxies as massive systems of stars and other interstellar objects bound together by gravity, such as the Milky Way our solar system belongs to. Think of a galaxy as an entire human body. The earth is the universe, organ systems inside the human body are solar or planetary systems, and their respective organs are the stars and planets. Galaxies differ in shape, size and other characteristics in the same way that human bodies do. Hence we have galaxy classifications; one of them is symmetry and an example is an irregular galaxy.

An irregular galaxy has no rotational symmetry, the cause of which may be mere immaturity (think of a boy still experiencing pubertal changes with his body); collisions with other galaxies, or even just the mere interaction of its gravitational force with another galaxy. It may also be due to the ejection of energetic bubbles of gas which contribute to the galaxy having a blobby appearance. An example of an irregular galaxy is the Large Magellanic Cloud (LMC), a galaxy 163,000 light-years away in the Local Group near the constellation Dorado. Its irregular shape is speculated to have been due to disturbance such as the collision of two galaxies.