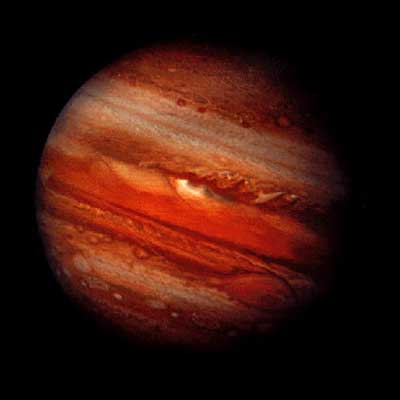 Are there planets that are not composed of rock, like Mercury, Venus, Earth and Mars? Are there planets where there is no land, just all nothingness? Yes, there are, they are known as a Gas Giants, they are large celestial bodies that are instead made up of gases. They may have a solid core, and their storm-laden atmosphere is very thick. They are all so large they could fit ten Earths.

Solar System’s outer planets Jupiter, Saturn, Uranus and Neptune are all gas giants. Jupiter and Saturn are composed mainly of molecular hydrogen, metallic hydrogen and helium. While Uranus and Neptune, the ice giants, are made up of water, ammonia and methane ices on their mantle, and hydrogen, helium and methane gases on the surface. Hence, their beautiful baby blue and ultramarine colors.

The sad apart about these gas giants is that landing with a spaceship on them isn’t possible because they don’t have any surface. And as one goes closer to their cores gaseous atmospheres become thicker and denser. The difference between a rocky planet and a gas giant is that unlike the former, the latter’s atmosphere is also indistinguishable with its mantle. So extraterrestrial creatures from Jupiter, Saturn, Uranus, Neptune and other gas giants in the Universe are quite unthinkable.