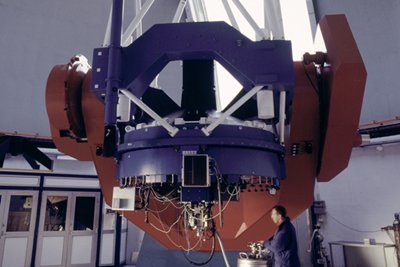 Most mass-produced catadioptric as well as many mid-sized professional telescopes have fork mounts as its mount. Among the advantages of using a fork mount as opposed to a German equatorial mount (Gem in short) is its ease of use, ease of setting up, and versatility. Fork mounts are also more portable than a GEM, owing to its compact size and lighter weight (GEMs need large counter-weights in order for it to be positioned freely).

This type of mount also provides easy access to the telescope?s eyepiece, and also costs cheaper than other telescope mounts. Because telescopes mounted on fork mounts need shorter range of motion for tracking, this provides a more convenient way of viewing objects in the sky. Fork mounts are also more suitable for automated or computerized telescopes, not needing to be readjusted when the object being tracked crosses the meridian. This is because unlike the German equatorial mount, a telescope on a fork mount can track objects through the meridian continuously.

Comments - No Responses to “Fork Mount”