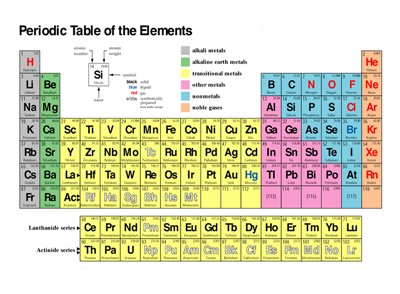 An element is a pure substance which is made of one type of atom. The atom is distinguished by its atomic number, which is equivalent to the number of the protons located in its nucleus. Every object?solid, liquid or gas?is made of an element or combination of elements. Examples of them include hydrogen, helium, carbon, silicon, gold, uranium etc.

Long ago, people believed that there were four main elements: earth, water, air and fire. However, modern chemistry has proven that there are more. As of March 2010, there are 118 ?discovered? elements on the planet. Some exist naturally, while others are products of various processes to isolate them from their ores and/or generate them from other elements. There are numerous possibilities of undiscovered elements in space.

The atomic number, commonly denoted as ?Z,? is the assigned label of distinction for each element. It refers to the number of protons in the nucleus of an atom. Together with the protons are the neutrons, forming the bulk of the atom?s mass. Revolving around the nucleus are electrons that bear a negative charge, usually containing the atom?s energy.

Some light elements like hydrogen and helium are used by stars as fuels. When their atoms undergo fusion, they can release tremendous heat and energy.

Everything around us is made of elements that are bonded together. Some can even bond in different ways, forming allotropes. For example, pencil graphite is made of carbon. However, if they are bonded in a crystalline structure, carbon can also form diamonds.

Comments - No Responses to “Element”