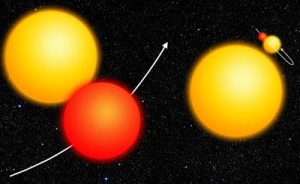 Many stars are moving together with other stars in space. These groups are called multiple star systems. An example of this system is an eclipsing binary star. It is a pair of stars that revolves on an imaginary ?center.? Their center of revolution is based on their common geometrical center of masses.

An eclipsing binary is also called a double star. However, double stars may refer to eclipsing pairs or optical pairs. Optical binaries, from a distance, appear that they are revolving around each other. But in fact, they are not related or they are separated by huge distances.

They are called eclipsing because, at some points, the partner star covers the other from the line of vision from earth. It is significant to know if a star belongs to such pair. Astrophysicists can use the data of one of the stars to approximate the mass of the component star.

Scientists usually employ spectroscopy in observing these pairs. In photometrics, they use the changes in brightness when eclipses occur. Astrometrics, on the other hand, deal with deviation of the star?s position?with respect to the unseen partner.

A popular example is the Sirius Binary System. The Hubble telescope has captured a clear image where the star Sirius B can clearly be distinguished from its partner.

Comments - No Responses to “Eclipsing Binary”