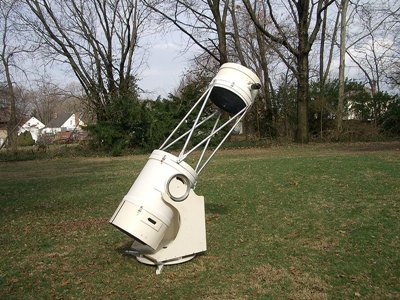 Amateur astronomer, John Dobson, created a telescope which featured a simplified mechanical design that was easy to set up. The Dobsonian telescope is basically a reflecting telescope that uses mirrors instead of lenses. The telescope can be swiveled in any direction, just like a toy cannon with the concave mirror up front and the telescope tube at the back. The eye piece is usually located on the side of the tube, near the front. The telescope can be made of wood and is generally inexpensive making it highly popular among amateur astronomers.

One of the drawbacks of the Dobsonian telescope is it is manually controlled. Unlike other fancier telescopes that come with an in-built camera or computer, the Dobsonian telescope has to be manually maneuvered which means you need to know where to point it at. In order to beat this problem, Telrad devices can be mounted on the side of the telescope which makes it easier to find brightly-lit objects in the sky.

Over the years, modifications to the original design have been made, such as the collapsible tube assemblies for easier transportation. The popularity of the Dobsonian telescope has even caught the eyes of several manufacturing industries hence commercial adaptations of John Dobson’s ingenious design has been made for mass production.

Comments - No Responses to “Dobsonian Telescope”