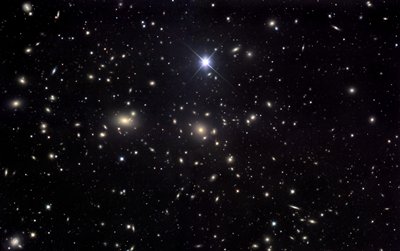 In Astronomy, a Coma is known as the hazy envelope and tail of the comet nucleus. Comas are formed when the comet comes into the inner solar system where frozen gases are vaporized due to the high temperature.

The larger charged particles comprising the orbital path remains in its highly elliptical orbit; while the smaller charged ones are pushed away from the sun due to light pressure. These excited particles emit light and at the same time reflect light from the sun which in turn gives the comet its cloudy appearance. The coma can reach up to 150 million kilometers long (one astronomical unit) if the comet nucleus is 50 kilometers in diameter or more.

Dust and gases specifically form their own tail, which points to slightly different course. The tail of dust, in particular is left at the back of the comet such that it forms what to be known as anti-tail or dust tail. On the other hand, there is the ion tail. If the ion tail is sufficient, magnetic reconnection can occur because the magnetic lines are pressed into one another. Magnetic reconnection usually occurs in the ion tail. This phenomenon eventually leads to the “tail disconnection event.” This event happened to Comet Encke in 2007.